The only bamboo species native to the United States. The young shoots of this species are of good quality for eating, and the culms are sturdy and useful for stakes and other purposes. Rugged, cold-hardy, and adaptable, it is useful as a hedge, screen, or windbreak plant. The plants also furnish excellent cover for birds and other wildlife, and food for browsing animals.

The groves, or “canebrakes” (from the word “brake”, meaning “thicket”) of this species once covered vast areas of fertile river bottom land in the pre-colonial U.S. A single river valley grove could be 2 or 3 miles wide and 100 miles long. In pre-colonial times, herds of bison would swim across the Mississippi River in winter, when food was scarce on the prairies, to feed in the huge, lush canebrakes of Kentucky and Tennessee. The American Indians also made extensive use of canebrake bamboo, for a variety of purposes. Since they occupied fertile land and were easy to clear, most of the canebrakes were converted to farmland by the early settlers. Only relatively small remnants of these canebrakes exist today.

One of the first bamboos we acquired, this species has been in the ground here since about 1975. It has been relatively slow to develop and spread. The tallest culms currently are about 18′ tall. It has been the most cold hardy of the large bamboos which we have tested in the ground here. The leaves are usually killed at about -10° F to -12° F. The canes, however, have withstood -16° F with only minor injury, and leafed out fully in spring. At -19° F, some culms were injured or killed but some survived with little injury. Small plants may not be as cold- hardy; the cold hardiness of our planting has improved with age. Relatively slow and difficult to propagate.

Our grove of Arundinaria gigantea has been flowering and setting seed for about the past 3 years. So far, the vigor of the grove does not appear to have been affected. For this or other bamboo species which are in flower, it is helpful to maintain good levels of nutrients (especially nitrogen) in the soil to encourage vegetative growth and discourage flowering. Use fertilizers in moderation, however, as too much can be more harmful than too little.

It is interesting to note that during the year 2000, at least, cardinals were regular, conspicuous visitors to our canebrake bamboo grove throughout the growing season, and quite late into the fall. Almost certainly they were there to feed on the nutritious seeds, which are about the size of a grain of wheat. Cardinals and canebrake bamboo are both natives of the Southeast, and suffice it to say they go back a long way together. Neither was originally present in Massachusetts; both are naturalized residents here. As cardinals are non-migratory, it has likely been a long time since the local cardinal population or any of their ancestors have encountered canebrake bamboo seeds. Yet when our canebrake bamboo began to produce seeds, the cardinals quickly recognized them as food. It may be that other birds have been feeding on the seeds also, but if so we haven’t particularly noticed them.

Sizes over 3′ tall are not always available during the months of January to May, but are usually available at other times. 5′-7′ and larger sizes are not shippable by UPS. Quantity rates and wholesale rates available on request. 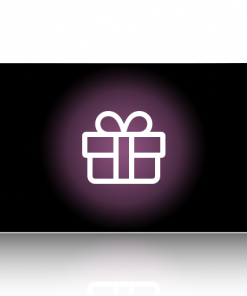 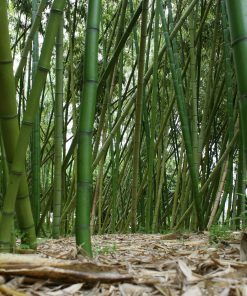 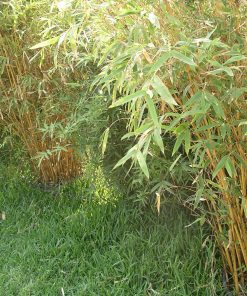 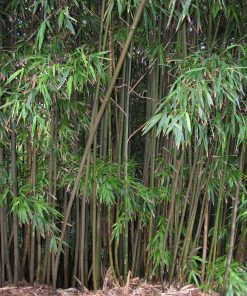